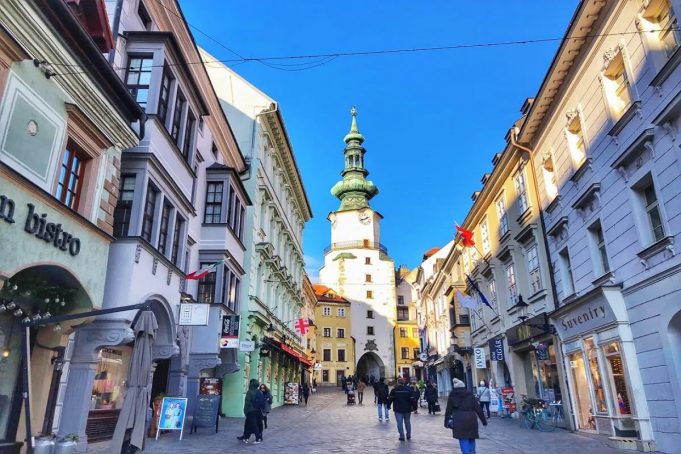 In its 2,000-year history, Bratislava has gone by a number of names, served as the capital of Prague during the time of Czechoslovakia, and was the largest city in Hungary. Today, Bratislava serves as both the governmental hub and a tourist-friendly city for Slovakia.

In its 2,000-year history, Bratislava has gone by a number of names, served as the capital of Prague during the time of Czechoslovakia, and was the largest city in Hungary. Today, Bratislava serves as both the governmental hub and a tourist-friendly city for Slovakia.

In Bratislava, the tourist season never ends. The busiest times of year in the city are in July, August, and December, from the start of the Christmas fairs through Christmas Day. Bratislava, which acts as both the nation’s capital and its gateway, is one of Slovakia’s most popular tourist sites. The city serves as the main centre for history, culture, recreation, good cuisine, and wine in Western Slovakia. Bratislava is regarded as being Europe’s newest capital as well. What should I do and where should I go in Bratislava?

The square is located in the Old Town. With restaurants, gift shops with a wide selection of trinkets, and baroque homes and palaces all around, it is a popular tourist attraction. It was once known as Market Square due to its past as the site of the town’s fairs. The Roland Fountain, which first appeared in the 16th century on the eve of Emperor Maximilian II’s coronation, is located in the centre of the square.

The ruins of a castle from the ninth century can be found where the Danube and Morava rivers converge. To the end of the seventeenth century, the stronghold fulfilled its intended function. It got worse when Slovakian land was annexed by the Turks. The building was demolished by Napoleon Bonaparte’s army in the beginning of the 19th century. Because the castle was never rebuilt, only one of the halls has a small display. In 1985, Devin’s remains and the surrounding area were proclaimed a natural monument.

The building, which later served as the town hall, was built in the 13th century. From its façade, one can see Primate and Main Squares. Due to its numerous renovations and additions, the town hall is a fusion of several architectural styles, from mediaeval Gothic to neo-Renaissance. The building is presently home to the City Museum, which contains an exhibit about Bratislava’s history.

The Old Town, which houses numerous government buildings and international embassies in addition to architectural landmarks, is the city’s historical and administrative centre. The majority of Bratislava’s historical and cultural sites are located in the city’s eastern region. The western part of the Old Town borders the Bratislava Castle, which is situated on the foothills of the Carpathian Mountains.

A monument to the plumber chumil

In addition to serving as a reminder of the end of the war, the little figure of a plumber gazing curiously out of a city manhole was made to honour the honourable profession of plumbing. Many Bratislava residents sought refuge from the bombardment in the city’s sewers during World War II. In Slovak, “chumil” means “gawker.”

The structure was built in the 18th century using neoclassical design. According to one source, the building dates back to the 14th century and underwent renovation and modernization in 1778. For Hungary’s primate, Archbishop J. Battiani, the palace was built. In the 20th century, the government took control of the building. During the restoration process, English carpets and tapestries from the 17th century were found, and they are currently used to adorn the inside of the palace.

Bratislava is a rather varied city overall. But should fate lead you there, Bratislava is also a terrific destination to have fun. M.R. Tefánik sometimes referred to as Bratislava Ivanka, the nation’s main airport, located only 4 kilometres to the east of the Slovak capital. In less than 30 minutes, for just 90 cents, you may ride bus number 61 from there to the train station or the heart of Bratislava. However, Slovakian airport transfer services are the finest option. You and your family will have a comfortable trip thanks to it. If you employ AtoB airport transfer, you won’t have to worry about getting overwhelmed at a public transportation stop. Enjoy Bratislava and see how unfairly underestimated it is!

What Time is it in California?

4th Largest Island in the Philippines

What is Insurance? Types of Insurance, Benefits

How To Decorate Your Home in French Country Style?

What Time is it in California?

29 Best Things to Do in Cumberland MD

What Time is It in Hawaii?

The Geometry of Tozome Limited

How To Choose Best Car Insurance?

We provide you with the latest travel news straight from the entertainment industry.
Contact us: contactourinplanet@gmail.com